Dawnbringer is a crazy ambitious project, where we tried to recreate the epic feel of a full blown Fantasy RPG on a mobile device. It’s a coproduction between Kiloo and Copenhagen Creators. We have developed on this for over 3 years now, by far the longest production we’ve ever had, and looking back on the production we were perhaps a bit too ambitious. We are enormously proud of where the game is now and we’ve learned a huge deal from the production. It’s available on iOS and Android.

Frisbee Forever 2 is the sequel to Frisbee Forever. In the project, my main role was again UI development together with other developers this time. The quality of this product is quite high and arguably higher than that of Subway Surfers. For the UI we took the stuff developed in Subway and made some very good improvements and all in all I’m very happy with the finished product. It’s available in the app store now, and I recommend you try it on one of the newer iPads to really experience the gorgeous graphics.

Subway Surfers is a co-production with Sybo Games, where they focused on doing the ingame, while we did UI, menu and meta-stuff. This is an ongoing development, since it has been a phenomenal success since it came out. I worked on mostly all of our stuff, until we got closer to the deadline and we had to pull in some more developers to get it finished. For this project I started using NGUI: Next-Gen UI Kit for the UI, which has been a huge boon. I heartily recommend anyone working in Unity to try it out, since it’s the best UI tool out there right now. Subway Surfers is an evolutionary step above the runner genre, which obviously blazed forward with Temple Run, but harkens back to old games like Hugo.  Try it now!

Bullet Time HD was one of the first major projects I worked on. The team was significantly bigger than earlier, in turn each developer’s role became more focused. My role on this project was to do menu UI together with the Creative Director, who acted as UI designer. For GUI we used the old style GUITextures and GUITexts that Unity3D has built in, which came with definite drawbacks such as memory use and app size, on the other hand it was possible to finish a lot of work very fast. We did use 2DToolkit for ingame GUI, but using it for the menu system would have been too time consuming, since we were under significant pressure of deadlines. Bullet Time HD was a great challenge to work on, but it was also one of the most rewarding experiences – we brought high quality stuff to the iOS devices and it had a bigger RPG element in it than most games did at the time. We also developed synchronous multiplayer between iDevices, which I’m very proud that we got to work – not without its challenges. Bullet Time HD marked a significant step up in quality from earlier products for us at Kiloo.

Frisbee Forever had been a great success on iOS, so we wanted to port it to Android. The gameplay didn’t have to change, but we needed to handle all the different resolutions for Android, so I was put in charge of solving this problem and porting the features that were native to iOS like inapp purchases and external SDKs. In the end I completed the resolution problem, but had to be reassigned to the next project because of deadline issues. Two other developers completed the Frisbee Forever porting, which has been quite successful in that market as well.

I was put in charge of converting the old Whac-a-mole game into Bash ‘Em, which would incorporate a shop and a new endless game mode. I worked on the programming, while others obviously took care of the art and design. It was a challenge to work on the code in this one, since many different programmers had worked on different parts in the past. In the end, I feel good about the things we added and I got a lot of iOS experience doing it.

Sadly, Bash ‘Em is no longer available in the App Store. 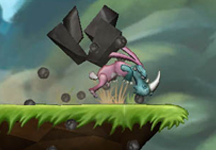 This was my second games in a DADIU production (march 2011), and again I was the Game Designer for this product. Blendimals is a quirky puzzle platform game, where you have to blend different types of animals to solve the level. This time around, we specifically targetted the iPad as a means of interaction, such that we would be able to port it from the web player to that easily. My experience from Kiloo helped me in multiple ways, most of all how to target the mobile device properly. We had a bunch of challenges, but I think the final product was a well rounded play experience. Try it now at blendimals.dadiugames.dk. I also made the website at blendimals.dadiugames.dk as a “holy crap, we also need a website 3 days before deadline” kind of deal. Furthermore, some members of the team have decided to go on with further development of the game, to move it to iPad and iPhone and make millions. See their website at: blendimals.com.

Rasmus Klump for iPhone and iPad

I was the primary developer on the first edition of Egmont’s Rasmus Klump for iOS, which is the first iOS app I’ve made from scratch. It was started in November 2010 and completed in the end of February 2011, which is a fast pace, I think. It was a very learning experience and I’m proud of the app. In English Rasmus Klump is known as Bruin or Barnaby Bear. We wanted to avoid as much text as possible to make it accessible to kids, which has the added bonus that non-danish speakers can use it as well. Try it out, it’s free. Get it on iTunes app store

Mega Bloks for iPhone and bada

This is the first commercial game I’ve been involved with. When I joined Kiloo as an intern in the beginning of 2010, I was assigned this project, which had been put on hold at about 50 % since the previous developer had been reassigned. I took over and brought it to where it is now. The targeted system was initially only the iOS platform, but after my internship finished in june, Samsung’s bada platform was also included in the mix. I was hired as a full-time developer after this, and finished the game in October 2010. Get it on samsungapps now. It’s sadly no longer available on the iOS App Store. 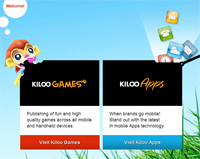 I developed Kiloo.com for Kiloo. The website is using wordpress 3.0 and I created the wordpress theme for the site. I also coded a few plugins, such as the twitter integration. There are two main divisions of the site, Games and Apps. The games section had to have a blog and a news portion and furthermore show off a bunch of the games that Kiloo Games have developed. The apps side needed to be able to show off cases and different static pages. I also developed a custom gallery viewer for the site. Since then, the website has undergone major reconstruction so there’s very little left of my stuff, if anything, on the site.

I was the game designer for a game developed in the DADIU program in May 2010. It was developed in Unity3D over the course of a single month. We worked 14 people on it in different roles and with input from people in the “real” game industry. It was a very rewarding experience and I’m looking forward to my second time in March of 2011, where I again will be a game designer on a new project. You can try the game in the Unity3D webplayer at catnapped.dk.

We won the award for “Best Artistic Game” at Live 2011 Grand Prix in Turku, Finland, which certainly was an honor. They concluded that:

And noted such details as:

I developed a second addon for World of Warcraft, when another similar addon stopped working and I wanted to be able to use it again. It’s called Color Inventory, and colors your items in bags, trade windows, loot window, bank and guild bank depending on their quality. It even works with Combuctor, a good bag addon in its own right. See more at http://wow.curse.com/downloads/wow-addons/details/colorinventory.aspx
I have not maintained the Warcraft addons since I stopped playing WoW.

I’ve developed an addon for World of Warcraft, which is called Critline Basic. The addon records all your hits and saves your highest critical and normal hits, so that you can see how much damage a given spell or ability deals. It also functions for healing and pet damage. See more at http://wow.curse.com/downloads/wow-addons/details/critlinebasic.aspx
I have not maintained the Warcraft addons since I stopped playing WoW.
Other projects with no particular description
Bacheloropgave.zip
bispetorv_renders
BeerFlex.swf
bispetorv.zip
borsbar.swf
BeerPrototype.swf
slideshow.swf
bispetorv
moonTween.swf
simZombie.jar
BeerFlexOld.swf
y1s2_rabbithunt.zip